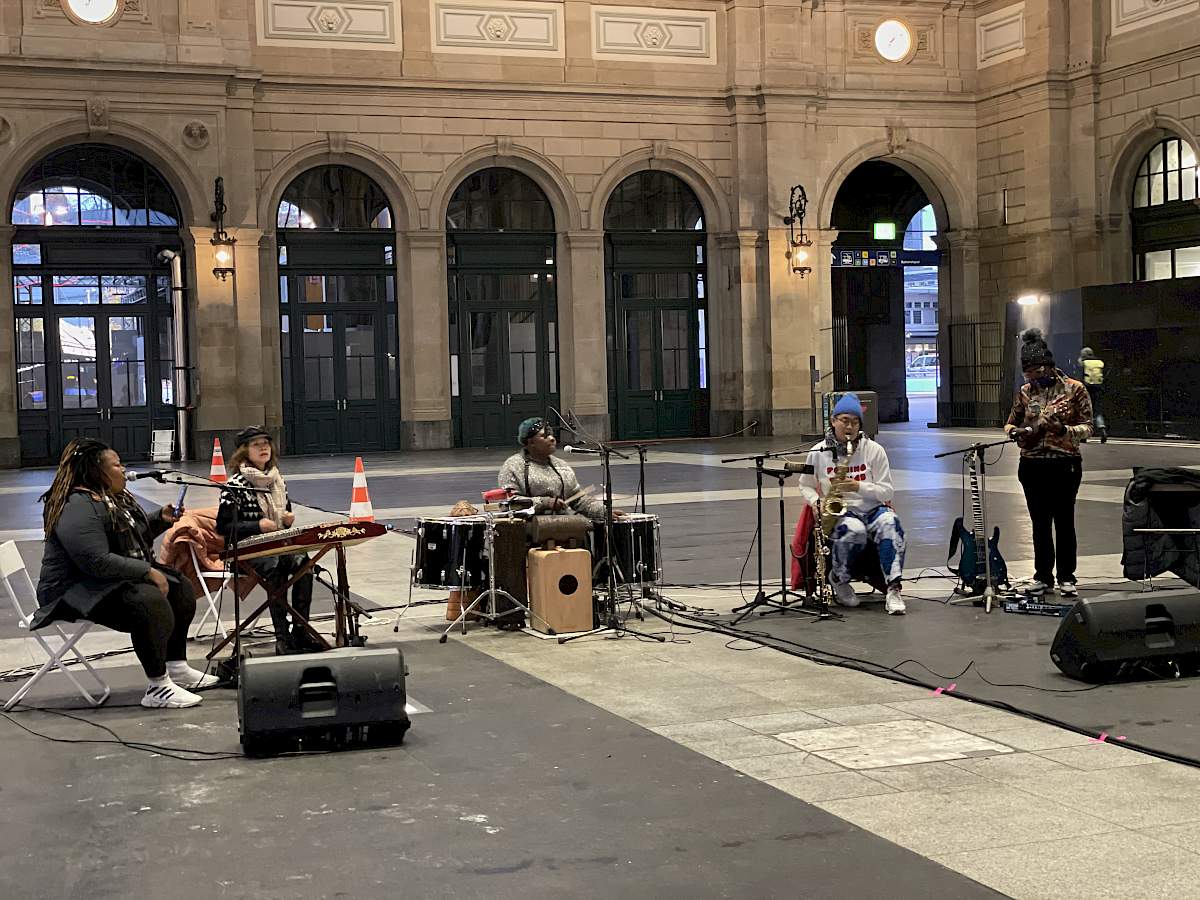 Writer Ramcy Kabuya was present at the final rehearsals and concert at Zurich Main Station as part of this project. Below, excerpts from his heard reflection are shared as an artistic perspective on the work.
We would like to leave this listening experience of one of the first concerts of our work extra unfiltered and critical as it comes across. Part of our work as musicians and with the initiative guerillaclassics is to share courage, to explore and go new ways. This attitude can also lead to difficult topics and perceived insurmountable problems. However, we believe that in the evolution of work, it is precisely these difficult moments that are there, and then, through deep reflection around one's roles and intentions, come to a better result later on.

Autumn morning, Zurich. The day breaks only hesitantly. Extensive renovation work is being carried out in and around the main station. The roar of jackhammers and the sound of machines moving back and forth haunt the people entering the main hall, where the most imposing of the "Nanas" hovers, carried above our heads by its golden wings. There, in the middle of the vast, empty space, musicians tune their instruments. A stage in an arc. Five artists, five sensibilities, five musical backgrounds, five horizons and, above all, five women so different that what they propose can only be an experiment. Sounds ricochet and die under the twenty-metre high vaults. It is furtive, but enough to interest or even fascinate.

Context of the encounter: (re)establish a dialogue

If this project is an experiment, then the Yango Biennale Kinshasa and guerillaclassics are the laboratories for it. Both are working to explore the fields of performing, contemporary, visual and musical arts to promote bold artists with their expertise.(...)

Finding and building paths together...

Such an adventure requires not only talent, but also time, willingness, independence and, above all, an understanding of the challenges and the forces at play. It is not enough to cast a suspicion - albeit a legitimate one - on the concept of classicism; it is imperative, moreover, to grasp the clarity of what is developing in the confrontations and to gauge its significance. (...)
This great ambition, shared by all the participants, calls for a way of stripping away, a way of settling down in front of the future work, free of all prejudices and without shenanigans. Since uncertainty is part of the process, one devotes oneself to the multiplicity of possibilities by lying in wait and vigilantly following the vibrational experience. As the sounds that collide do not remain unchanged as they respond to the environment, the musical gesture of the creative performer becomes an echo of this reverberation in a sincere listening and a deep "understanding".
This approach is palpable right at the beginning of the set in the duo of Kay Zhang (saxophone) and Huguette Tolinga (percussion, voice, vocals). The two musicians attempt to explore and tame a formless, singing, nebulous mass that makes the process almost infinite and constantly renewed. They create a circularity based on an indestructible material consisting of breaths and primordial pulses. The understanding between them is enough to create the conditions for the docking of distant musical styles with a clear status. This is true for Congolese rumba, which has just been declared an intangible cultural heritage by UNESCO, and for traditional Chinese music. Both are shaped by ideology, history, sociology or anthropology and undoubtedly enjoy credibility outside the music sphere. The chosen meeting point is not the most obvious one, however, as it is about letting the solo guitar of Sarah Solo and the yangqin of Chengyi Wang enter into dialogue with each other. Two temperaments, two instrumental approaches, all contrasting. The first is introspective, understated, glittering music. It drinks from a practice long codified and handed down. Chengyi Wang had a very academic education in Xi'an before setting up an orchestra in Paris consisting mainly of traditional Chinese instruments. The second is expansive, spectacular and eruptive, very much in the spirit of the "sebène" that rumba artists have created over time. Incidentally, it is so emblematic that it is presented as a style in its own right, when in fact it is only an element of the composition whose observable effects shed light on how it works and how it is understood. First of all, there is the expansion: "Sébène" expands the piece as a whole and offers other possibilities that go far deeper than dance. It is often defined as "the dance part" of a song, but nothing is less reductive. Without it, a song is over, but paradoxically it remains incomplete. The "sébène" keeps it alive and completes it, having given it a new pulse. All equilibriums must be found in a true encounter that results neither from a rumba reinterpretation of a Chinese melody nor from the transfer of a Luba classic to the yangqin. So what is a classic? That which is capable at any time of restarting the creative cycle, of reactivating the need for emptiness to re-engage our senses.

How far have we come?

The intention of the project is undoubtedly greater than what currently emerges from it, especially since its implementation is not without obstacles: structural problems, mobility policies, etc. At present we are dealing with exploratory work, which is interesting but needs to be refined. Perhaps it would be useful to move away from the idea of preparing and presenting a concert? Would it be advisable to abandon methods of cultural animation? This projection devours the creative horizon and brings mechanisms back into play that are detrimental to searching and listening to each other. Finally, this work will only progress if all forms of comfort are banned, otherwise it will be the umpteenth beautiful idea that is unfinished, brooding, cadaverously thin and at risk of stagnation if no clear result is achieved. To get everyone on the path of consensus, the framework must be unravelled, the goal must become clearer, especially the aesthetic goal with the connection and interweaving of all sensibilities. If music is only vibration, one obviously has to find the one that puts everyone in the same mood. In this way, one could cross the threshold of expression to form the sketches of a new spirit and cut them out of the raw material.

Ramcy Kabuya is a teacher, journalist and writer with a PhD in French-language literary history. His work deals with aesthetic issues and intermediality. He is the author of numerous publications for the press and academic journals. He regularly collaborates with the journal africultures.